Basic feathers are... basic. But they're not to be ignored! Their simplicity makes them a great base for Feather projects, when you don't need a wireless network, or built-in datalogging.

These were the First Feathers, as it were. They form the basis of later Feathers, so if you start here you can upgrade!

Note that there are ATSAMD21, ATSAMD51, and nRF52840 Express Feathers with extra flash onboard for CircuitPython use listed in the CircuitPython page.

Anything but basic, the Adafruit Feather M4 is the top of the line Feather for heavy lift.

It is powered by our new favorite chip, the ATSAMD51J19 - containing a 120 MHz Cortex M4 with floating point support, 512KB Flash and 192KB RAM. Your code will zig and zag and zoom, and with a bunch of extra peripherals for support, this will for sure be your favorite new chipset.

The most exciting part of the Feather M4 is that while you can use it with the Arduino IDE - and it's bonkers fast when you do, we are shipping it with CircuitPython on board. When you plug it in, it will show up as a very small disk drive with code.py on it. Edit code.py with your favorite text editor to build your project using Python, the most popular programming language. No installs, IDE or compiler needed, so you can use it on any computer, even ChromeBooks or computers you can't install software on. When you're done, unplug the Feather and your code will go with you.

The ATSAMD21 M0 is a 32-bit Cortex M0, with a ton more flash and RAM: 256KB and 32KB. It is also supported in Arduino but is a little newer (circa ~2015) and so does not have as many years of projects and example code already. It's also a completely different chipset than the AVR, so low level code will not work and must be re-written.

That said, its about the same price and you get a ton more speed (48 MHz and 32-bit processing), and peripherals. For example you can easily create multiple hardware UARTs or I2C ports, which is impossible on the AVR. Other stuff like I2S audio, 12-bit analog input, and true analog output (DAC) is only available on this chip. Especially if you're running low on Flash, RAM, or analog inputs, this is a nice upgrade.

The Feather M0 Express has added a Mini NeoPixel, 2 MB SPI Flash storage and a little prototyping space. Perfect for using with CircuitPython but also runs great with Arduino.

The Feather M0 Basic is a speedy chip mostly designed for Arduino programming. It can run CircuitPython but the board lacks the extra off-chip flash for extra storage space.

The Feather M0 Adalogger features a MicroSD card slot for adding as much storage as you could possibly want, for reading or writing.

Adafruit Feather M4 CAN Express with ATSAME51
One of our favorite Feathers, the Feather M4 Express, gets a glow-up here with an upgrade to the SAME51 chipset which has built-in CAN bus support!  Like its SAMD51 cousin, the...
$24.95
In Stock
Add to Cart

One of our favorite Feathers, the Feather M4 Express, gets a glow-up here with an upgrade to the SAME51 chipset which has built-in CAN bus support!  Like its SAMD51 cousin, the ATSAME51J19 comes with a 120MHz Cortex M4 with floating point support and 512KB Flash and 192KB RAM. Your code will zig and zag and zoom, and with a bunch of extra peripherals for support, this will for sure be your favorite new chipset for CAN interfacing projects.

The ATmega328P is nearly identical to the ATmega328 processor on the Arduino Uno and related boards. The Arduino core is rock solid. It still carries the same specs: 32 KB Flash and 2 KB of RAM. It runs at 8 MHz and uses a CP2104, a USB serial converter for USB bootloading and serial port debugging. There are 19 GPIO pins + 2 analog-in-only pins available on this tiny board. Adafruit Feather 32u4 Basic Proto
Feather is the new development board from Adafruit, and like its namesake it is thin, light, and lets you fly! We designed Feather to be a new standard for portable...
$19.95
In Stock
Add to Cart

ATmega32u4 is a well known 8-bit AVR processor, and may be more familiar to people who use the similar Arduino '328s. It's tried-and-true. The Arduino core for it was first developed in 2012 and so it's quite stable and well-known. Many low-level ATmega328 examples will work out of the box on the 32u4 (but not all!). It has 32KB of Flash and 2.5KB of RAM. It runs at 8 MHz and has native USB support

Adafruit Feather RP2040
A new chip means a new Feather, and the Raspberry Pi RP2040 is no exception. When we saw this chip we thought "this chip is going to be awesome when we give it the Feather...
$11.95
In Stock
Add to Cart

The RP2040 is Raspberry Pi's powerful chip that features a 32-bit ARM Cortex-M0+ Dual core with a ton more RAM than the ATSAMD21.

The RP2040 is a powerful chip, which has the clock speed of our M4 (SAMD51), and two cores that are equivalent to an M0 (SAMD21). Since it is an M0 chip, it does not have a floating point unit, or DSP hardware support - so if you're doing something with heavy floating-point math, it will be done in software and thus not as fast as an M4. For many other computational tasks, you'll get close-to-M4 speeds! 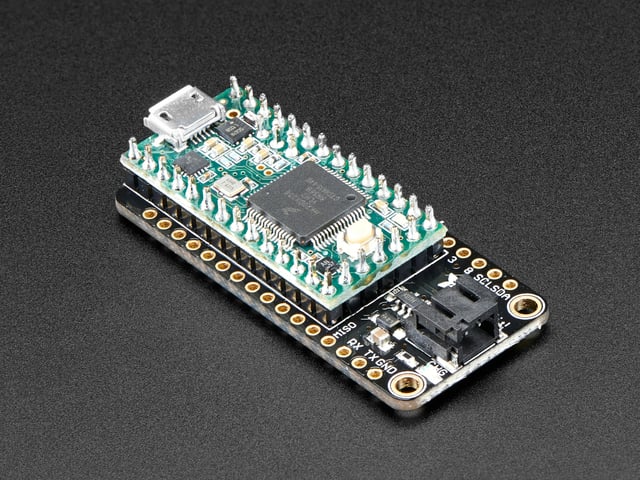 Teensy 3.x Feather Adapter
Oh man, is this not the best thing ever? You can now use the awesome Teensy 3 with any and all of our FeatherWings or
$5.95
In Stock
Add to Cart

It turns out the Teensy 3.2 fits right between the headers of a Feather, so we thought - hey lets make this into an adapter!
You get the awesome power, speed, and projects of the Teensy 3, with the wings of a Feather.

It's a great way to take advantage of the Feather ecosystem. You don't get everything - for example the EN pin isn't connected. But we've tested our FeatherWings so far and all are drop-in compatible.

With the space left over, we even added in a 500mA LiPoly charger that automatically charges over USB and will switch over to the LiPo when USB is unplugged. There's also a 100K resistor divider for monitoring the battery voltage connected to A7

Teensy not included, so be sure to pick one up, too!

Teensy 3.2 + header
Teensy 3.2 is a small, breadboard-friendly development board designed by Paul Stoffregen and PJRC. Teensy 3.2 brings a...
Out of Stock
Out of Stock
Feathers WiFi Feathers 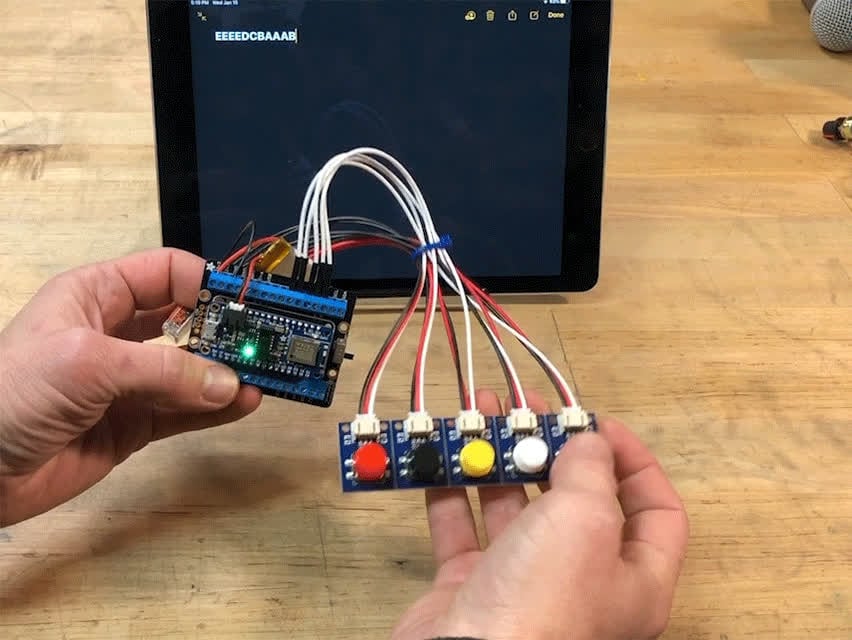