Unlike the resistive PiTFT, the capacitive version does not have a resistive touch controller chip that we can take advantage of as an extra backlight control pin. Instead, you can set up GPIO #18 as an on/off or PWM control.

Note that if you are playing audio out the headphone jack, you can't use the PWM capabilities of GPIO #18 at the same time, the PWM function is reassigned to do audio. However,  you can use it as a simple on/off pin

To enable using GPIO #18 as a backlight, solder closed the #18 backlight jumper on the PiTFT capacitive PCB! 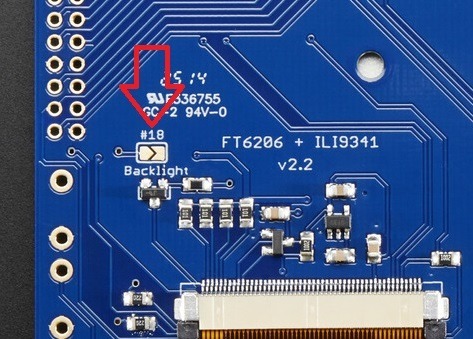 OK now you can use the PWM output on GPIO 18. There's python code available for controlling the PWM pin but you can also just use the WiringPi shell commands.