With the bureaucracy taken care of, you're ready to fire up a virtual machine. Click that "Create Droplet" button, and you should see a screen like this one.

The $5/mo option is more than adequate for most purposes, so let's go with that. Next you'll be asked to select which region the droplet should live in - or more exactly, which of several datacenters you'd like to host it in.

It's often advisable to pick something on your continent just to avoid a slow connection to the server. In this case, I went with New York.

Next, you'll be prompted to select an image containing a pre-installed distribution.

Here, I'm going with the latest stable Debian, because that's the most like a Raspberry Pi install of Raspbian. If you're planning to follow along with tutorials in this series, Debian (stable but fairly stale) or Ubuntu (a lot like Debian, but with fresher software and some different design priorities) will usually work well. Other choices are well worth exploring, but keep in mind that there are subtle (or not-so-subtle) differences between the distributions.

There's even an option to use FreeBSD, an operating system that's a direct descendant of the original AT&T Unix codebase. (FreeBSD is well worth exploring in its own right.) 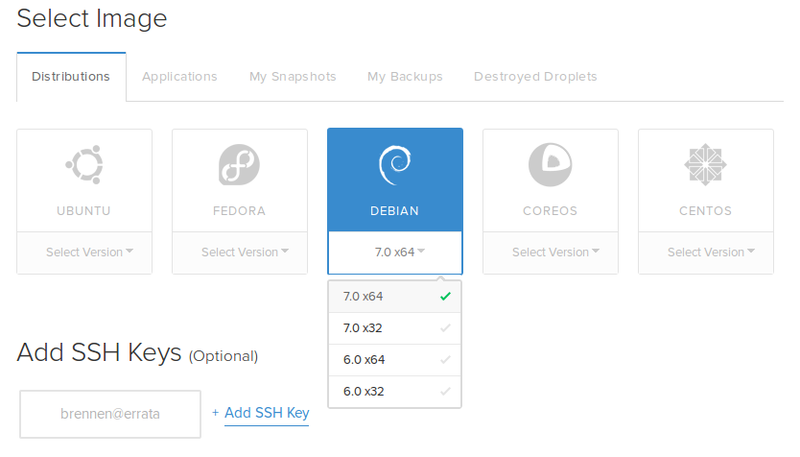 You also have the option to add an SSH key here. Go ahead, if you know what an SSH key is and have one lying around. Otherwise, we'll get into that in a minute.

Lastly, there are a variety of configuration options.  If you're planning to keep this droplet around for a while, you might want to enable backups now, because it's a little trickier if you change your mind later on.

All set? Click the CREATE DROPLET button and see what happens.

What is this "Linux", anyhow?
By Brennen Bearnes
93
Beginner